October 6, 2017: Volga-Dnepr Airlines’ An-124-100 and IL-76TD90-VD freighters have completed an emotional homecoming to Germany of a Boeing 737-200 which was hijacked by terrorists in 1977. The former Lufthansa aircraft is to be fully restored and placed on permanent display in the Dornier Museum in the town on Friederichshafen.

The fuselage and wings of the Boeing 737 was transported in a special frame for its An-124-100 flight from Brazil, while Volga-Dnepr’s IL-76TD-90VD carried the 737’s engines and other components.

The aircraft, named after the Bavarian town of ‘Landshut’, was hijacked on October 13, 1977, en route from Palma, Majorca, to Frankfurt. This was the start of a four-day ordeal for the passengers and crew as the aircraft was forced to travel to Rome, Cyprus, Bahrain, Dubai and Aden before reaching its final destination in Mogadishu, Somalia. The hijacking was ultimately ended by a daring early morning raid by German special forces, which successfully freed all 86 hostages. Tragically, the aircraft’s pilot, Jurgen Schumann, had already lost his life at the hands of the four terrorists before he could be rescued. 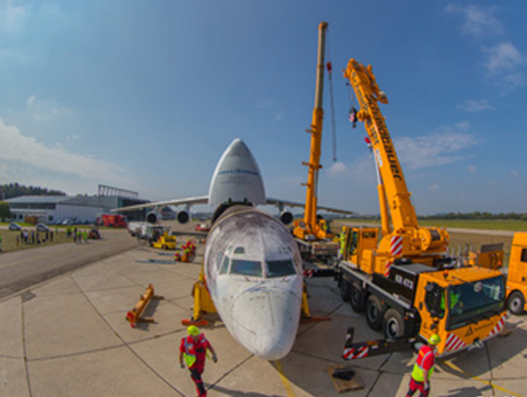 The Boeing 737-200 eventually went back into service and was later sold, ultimately flying for the Brazilian airline TAF Linhas, before being decommissioned in 2008. Since then, it had been abandoned at Fortaleza Airport in northeastern Brazil until the German foreign ministry purchased the 737 in order to bring it ‘home’, describing the ‘Landshut’ as a living symbol of a free society, which cannot be defeated by fear and terror.

Mikhail Smirnykh, general director of Volga-Dnepr Airlines, said, “We are extremely proud to have been chosen to bring the Boeing 737 ‘Landshut’ home to Germany. It is a symbol of the nation’s commitment to never bow down to terrorism. For us this is an especially poignant project to be supporting because our own company witnessed the tragic consequences of terrorism two years ago when six of our colleagues resting between flights lost their lives when armed militants stormed a hotel in Mali. Bringing this Boeing 737 home is, therefore, very meaningful to us and we share and support everything it stands for.”

Antonov Airlines delivers automotive parts from Asia to US

Antonov Airlines delivers automotive parts from Asia to US