FROM MAGAZINE : Super cargo hub in the making at DFW

Dallas Fort Worth International Airport or DFW has increased its focus on growing its cargo business that includes enhancing its facilities for high yield cargo commodities. Its position within the fourth largest metropolitan area in the US with a strong diverse economy is actively supporting its vision to become a super hub for cargo in the US.

There was something unique when Dallas Fort Worth International Airport (DFW) signed an agreement with Groupe ADP, the operator of Paris Charles De Gaulle Airport (CDG), to develop air cargo strategies that can potentially influence the movement of goods between Texas and Europe, and more specifically between CDG and DFW at the TIACA Air Cargo Forum in Toronto, Canada last month. While the agreement was signed between John Ackerman, DFW’s executive vice president of global strategy & development and Marc Houalla, executive director Paris CDG Airport, present on the occasion was DFW board member Madeleine Johnson. "We never had a board member in a cargo conference before. Thisis for the first time," Ackerman told The STAT Trade Times in an interview just a few hours before the official signing ceremony.

The focus on the cargo division at the board level is a remarkable indication of DFW's desire and vision to find a place among the tier one airports of the US. "We are among the top 10 airports in the US on annual cargo throughput; but if we take the integrators out, we are among the top six," said Ackerman. As for the record, for the year 2017, DFW handled 897,000 tonnes of cargo. And, according to Ackerman, 2018 will set a new record for cargo volume handled.

Up until a couple of years ago, there was no cargo strategy to talk about at DFW. But ever since it put a cargo strategy in place under the leadership of Ackerman, the numbers began to show strong positive growth trend. Ackerman claims that the growth is close to 20 percent in the last two years.

"Most US airports don't really focus on cargo; everybody focus on passenger because that gets the headline. But since the roll out of the strategy, we have seen an increase in domestic cargo, international cargo and significant growth in our perishables business. The market has noticed us. People now know about us," Ackerman said.

There is also a compelling reason why DFW will do well in the years ahead. The airport has been enhancing its cargo handling facilities at the airport to attract high yield pharma and perishables cargo. 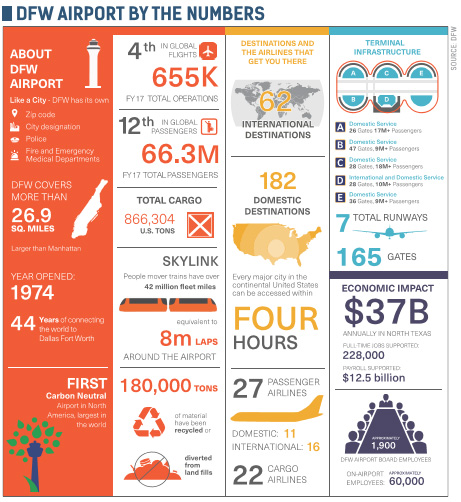 DFW invested heavily on a cargo terminal, which is managed by Dnata and was opened earlier this year. One element of the cargo strategy has been the focus on pharmaceuticals and healthcare traffic. The airport has underlined this with a push for IATA CEIV certification process. The 37,000 sq ft cargo terminal houses a cool chain facility of 18,000 sq ft with various temperature zones.

"Dnata is happy and they are looking for more space; they like to expand. We are also on the path to achieve IATA CEIV certification. We will be the second CEIV-certified airport in North America by the end of this year or early next year. We co-invested in that programme; we want to make sure that they (other stakeholders in the air cargo community at DFW) knew that we were serious about it," Ackerman reasoned.

As part of building the pharma traffic to DFW from Asia to North America and Latin America, Ackerman has been making regular visits to India, a major exporter of pharmaceutical products in the world, and talking to airport operators and pharma shippers. "We have been to Hyderabad three times this year and have a close working relationship with the Hyderabad Airport, which gathered Indian pharma manufactures and shippers as part of developing a pharma trade lane between DFW and Hyderabad," he said.

Talking about capacity at the airport Ackerman said there are no constraints on capacity. But the capacity is limited when it comes to cargo handling infrastructure. "Our buildings are full. The limitation is on the side of handling and buildings. The business is growing rapidly, and there is lack of suitable space to handle cargo," he said. According to him there is a cargo development plan on the physical side which will be announced soon. "We are deep in the planning and hope to announce later this year or early next year. The project is expected to be completed within 18 months of its launch," he added.

Ackerman credits his board for the immense support. "Our board chairman is enthusiastic about cargo, We did an economic impact study a few years back on what the airport did for the region. We found that that the airport delivered about $37billion in economic impact; of which over 55 percent was cargo related. Nobody knew about it. That really got the attention of the board because, the board wanted to ensure that we are supporting the community and the local government, that helped us to get the attention of the board," he said.

When the cargo strategy was deployed Ackerman and his team told the board that the aim is to join the tier one airports in the US — New York, Miami, Los Angeles, Chicago. Ackerman is fully aware of both the headwinds and tailwinds on the way to the top. But for the moment, his strategic plan for the cargo division of DFW calls for it to be the number one connecting point between Asia and Latin America.

"We want to be the number one North American gateway for Asia and Latin America, the two fastest growing regions of the world," he said.