FROM MAGAZINE : PANYNJ the voice of New York’s infrastructure

Nearing towards a century of success, the Port Authority of New York and New Jersey (PANYNJ) showcases its dynamic attitude to the ever changing infrastructure scenario and technological needs. The active involvement from conceiving, building, operating and maintaining a City’s infrastructure has established the efficiency of PANYNJ.

Little did Malcolm McLean anticipate that he would bring a wind of change in the history of logistics industry! In 1956, the North Carolina businessman sailed his converted tanker Ideal X from Newark to New Jersey, carrying 58 cargo-laden truck-trailers on its specially fitted deck. With this passage, ‘containerisation’ was born and globalisation set its sail.

Established on April 30, 1921, the Port of New York and New Jersey (PANYNJ) was the first to receive container to its port. Today, it has become the busiest container port on the East Coast in the United States. It covers about 1,500 square miles (3,880 sq. km) centered on the New York Harbor (about 25 miles of radius). For more than nine decades, the port has been hitched to providing the infrastructure, critical for New York and New Jersey region's trade and transportation network.

During 19th century the main focus was on railway and canal system, but finding New York growing as a hub, port activities went on par. With the consolidation of foreign trade, financial, shipbuilding and industrial activities, New York became an immigration gateway of North America. Since, the New York harbour and the lower Hudson River are the boundary between the states of New York and New Jersey, port development occurred under different jurisdictions. Some interstate conflicts led to the creation of port authority to settle these disputes.

JFK and EWR handle a substantial amount of air cargo transits. The consumption market of the region and its high end service industries generate large quantities of air cargo. Both the passenger and air cargo business account for more than 50 percent of the PANYNJ’s revenue. To address the connectivity issue between its two main airports and Manhattan, PANYNJ constructed road infrastructure. AirTrain services connecting the Newark airport with regional rail transit opened in late 2001, and another rail service between JFK and Manhattan opened in 2003.

The renovation work at LAG involves the redesign of the terminal facilities into a single continuous terminal with improved runways and taxiing areas. It is expected that by 2020, the new airport will be fully operational.

A fully integrated joint venture between Tutor Perini Corporation and Parsons Transportation Group Inc, for the design and construction of the new terminal 1 at EWR advanced recently. The $2.7 billion project is expected to provide passengers with a world-class customer experience, create jobs and boost the region’s economy once operational by 2022.

Yet another record was set on air travel in May 2018 on passenger segment at the Port Authority’s airports. All the three major airports (JFK, EWR, LAG) and the region as a whole set new, all-time May marks. The region’s total passenger traffic posted a 7.6 percent climb (+878, 594 passengers) while achieving a new mark of 12.4 million passengers. The international sector, too, set a record of 4.5 million passengers, driven by a solid 9.6 percent surge (+396,931 passengers). The region’s total freight volume grew 2.3 percent (+4,361 tonnes). Domestic cargo traffic, which represents approximately 36 percent of the region’s total freight volume, led growth with a 6.1 percent surge (+4,028 tonnes). International cargo inched up 0.3 percent (+334 tonnes).

A ‘Sea’ change
PANYNJ handles about 31 percent of the cargo on the American East Coast but the traffic is highly localised. Only 20 percent of the cargo is bound for the region outside the port’s immediate hinterland (New York, New Jersey and Connecticut). The maritime public terminals located include Port Elizabeth (Maher Terminals and Port Elizabeth Terminal; APM), Port Newark (Port Newark Container Terminal; Ports America), Howland Hook (New York Container Terminal; OOCL), Red Hook, Global Marine Terminal (containers), Auto Marine Terminal (vehicles) and South Brooklyn Marine Terminal (warehousing). The port authority has invested in recent years in on-dock rail facilities to favour the usage of rail to service the hinterland, which turned out to be effective.

Early in 1980s, almost all maritime cargo transshipment in Manhattan stopped and traffic was handled in New Jersey and Staten Island. Most of the port activities were thus relocated towards peripheral settings having higher access to rail and road.

Altering Landscape
All river crossings between the city of New York and the state of New Jersey are operated by PANYNJ. Together they carry more than 250 million vehicular crossings each year, and the George Washington Bridge is the most heavily used in the world, with about 300,000 crossings a day.

In the initial period of 1930s, the port authority was more into the construction of bridges and tunnels linking the two states. As the construction of Goethals Bridge, Outerbridge Crossing, George Washington and Bayonne bridges were completed before time and in lesser cost, PANYNJ’s reputation increased. Later on, it was awarded with many related projects. This major wave of construction, addressed the issue of connectivity between New York and New Jersey by road. 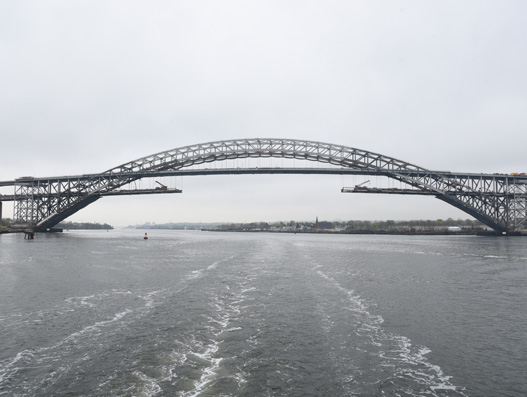 The 1950s and 1960s saw PANYNJ’s commitment to public transit with the opening of the Port Authority Bus Terminal (2.3 million bus movements and 65 million passengers per year), the Port Authority Trans Hudson railway (90 million passengers per year) and the George Washington Bridge Bus Terminal. In 1970s and 1980s, PANYNJ became more specifically involved in regional economic development with the construction of the World Trade Center.

The regional development initiatives included both the industrial parks (Bathgate in the Bronx and Elizabeth, New Jersey) and commercial developments offering office space (the Staten Island Teleport and the Legal Center, New Jersey) and the One World Trade Center office complex. They are also involved in two waterfront development projects contributing to the reduction of inner-urban problems by converting centrally located maritime terminals to mixed urban land use. The power plant’s contribution for regional development is via sustainability; on an average, 2,500 tonnes of refuse are converted into electricity every day.

Terminal Facilities
PANJNY has been proving as a dynamic player towards the changing environment. It had undertaken the dredging of a 50 feet channel servicing the main container terminals; the clearance of the major navigation channels of the port to a depth of 50 feet; and a project to raise the Bayonne Bridge to a clearance of 215 feet. This all conferred New York the status of a post-Panamax port able to accommodate ships of 14,000 TEUs.

Digital Way
The on-going information technology upgrade of the American airspace, titled Nextgen, is particularly important for New York because the three airports are impairing their respective approach and take-off vectors due to their proximity.

A state-of-the-art gate system promising to shave a quarter off of the average trucker’s turn-around-time at PNCT has come online. By 2018 end, the terminals capacity will be increased to 2 million TEU, increasing to 2.3 million TEU by the end of 2019. The rapid progress of this $500 million upgrade could attract shippers who are focused more on speed and efficiency.

Marching Towards
Since PANYNJ’s inception, it has expanded its assets. Doing so, it provided New York with a wide array of terminals handling freight and passengers. New York could not have become a global city without the transshipment and distribution capabilities provided by these projects.

The $1.6 billion Bayonne bridge elevation, which opened on June 8, 2017, raised the bridge from 151 feet to 215 feet, allowing ships of more than 9,500 TEUs to reach the terminals. An average of 10 ships of 10,000 TEUs or more called at the port in the first quarter of 2018 and a total of 93 ships of that size called at the port in the first 10 months after the bridge opened, compared with 57 in the same period a year earlier, port authority figures show. The increase stemmed in from CMA CGM’s South Atlantic Express route, from China via the Panama Canal.

With an estimation of 68 percent surge in cargo traffic around PANYNJ by 2045, authorities and stakeholders aim to enhance rail systems, add barge routes and make more efficient use of port facilities to mitigate the truck traffic. Thus, PANYNJ will be giving a final touch to the master plan of the New York City’s aging freight distribution systems. The $100 million plan is expected to reshape the port for growing demand over the next 30-40 years.