Sep 5, 2018: The International Air Transport Association (IATA) has called on the government of India to maximize the potential contribution of aviation to India’s development by addressing infrastructure constraints that limit growth and government policies that impose excessive costs on aviation.

Growth forecasts for India indicate a trebling of passenger demand by 2037 when some 500 million people are expected to fly to, from or within India. Already aviation supports 7.5 million Indian jobs and Rs 30 billion of GDP which translates to 1.5 per cent of the economy.

Global connectivity that only aviation can provide is a critical driver of all modern economies. The financial struggles of India’s airline industry put the stable development of connectivity at risk. And India’s carriers are suffering a "double-whammy" of steeply rising fuel costs and the decline in the value of the Indian Rupee. The rise in fuel costs is particularly acute for Indian carriers for which fuel makes-up 34 per cent of operating costs—well above the global average of 24 per cent.

"While it is easy to find Indian passengers who want to fly, it’s very difficult for airlines to make money in this market. India’s social and economic development needs airlines to be able to profitably accommodate growing demand. We must address infrastructure constraints that limit growth and government policies that deviate from global standards and drive up the cost of connectivity," said Alexandre de Juniac, IATA’s director general and CEO.

De Juniac’s remarks came in an opening address to the International Aviation Summit in Delhi, co-hosted by the Indian Ministry of Civil Aviation (MoCA), the Airports Authority India (AAI) and IATA. The joint Summit commemorates the approaching milestone of 50-straight months of double-digit domestic growth for Indian aviation.

India’s aviation infrastructure has benefitted from significant upgrades in recent years. "It is clear that India has the capacity to develop effective infrastructure. But the job is not done. Passenger numbers will grow. And infrastructure must not be a bottleneck in fulfilling the needs of travelers and the economy," said de Juniac who called for work in four priority areas. 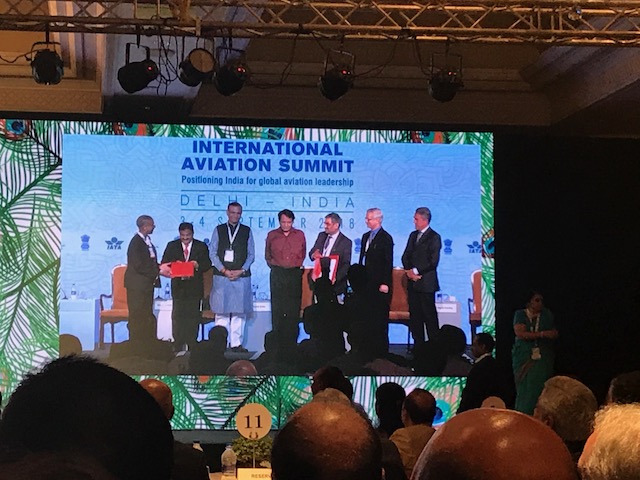 Firstly, there is a need to develop a comprehensive and strategic masterplan for Indian airports. "The infrastructure issue is critical for India’s future. Band-Aid solutions will not do the job," said de Juniac.

He has also suggested removing all obstacles to successfully open Navi Mumbai as quickly as possible. Urgent relief is needed for Mumbai’s severe capacity bottleneck.

Modernizing airport processes using technology in line with global standards is the need of the hour. The DigiYatra initiative will make a significant step in the right direction with digitally connected airports, passengers, systems and flights. In line with this, IATA encouraged the Indian government to support the broad implementation of IATA’s One ID initiative which uses biometric identification (similar to India’s Aadhar identity card) to save time by eliminating the need for repeated document checks in airports.

He also added that there should be flexible use of military airspace to expand airspace capacity for civil operations. This was successfully demonstrated with the opening of a conditional airway through restricted airspace over Bhuj and should now be expanded to more areas.

IATA also noted its concerns on government proposals for concession contracts at newly developed greenfield airports. "We believe that it makes no sense to fix a per passenger yield at the outset of a concession contract that is set to run for four decades. Flexible parameters should be set that are regularly reviewed by a regulator. And we know from bitter experiences in Brazil, Australia and elsewhere that selecting the company that simply proposes the highest concession fee does not yield good long-term results," said de Juniac.

IATA also encouraged the government to look at ways to improve India’s competitiveness by aligning with global standards and reducing excessive government imposed costs. Zero-rate GST for international travel in line with ICAO principles and international obligations; create a more competitive market for jet fuel by adding domestic uplift of domestic jet fuel to the GST framework with full input tax credit allowed and removing fuel throughput fees in line with global best practice. Creating competition with common-use open-access infrastructure, and regulating transparency in pricing of jet fuel and reducing excise duty on fuel were some of the recommendations made.

"There are many priorities in fostering the economic and social development of India. Fundamental issues of eradicating poverty, ensuring quality education, providing health care and safe drinking water are massively important agenda items. Creating a better environment for aviation to do business can and will progress the nuts and bolts of India’s development day to day. Safe, secure and sustainable air links make our world a better place. That is why I call aviation the business of freedom. And the government and industry share a privileged responsibility to work together for its success," said de Juniac.