Oct 14, 2019: Cargo throughput at Frankfurt Airport (FRA) took a drubbing in September 2019 on the back of the ongoing global economic slowdown. Cargo volumes, comprising air freight and airmail, shrunk 5.5 percent to 174,789 tonnes in September as compared to the previous year.

In the January-to-September 2019 period, cargo volumes dropped by 2.9 percent to just under 1.6 million tonnes. Growth was mainly driven by intercontinental traffic (up 3.4 percent), while European traffic grew at a slower 1.7 percent rate. Aircraft movements climbed to a total of 392,549 takeoffs and landings. Accumulated MTOWs expanded by 1.9 percent to almost 24.3 million tonnes in the reporting period. 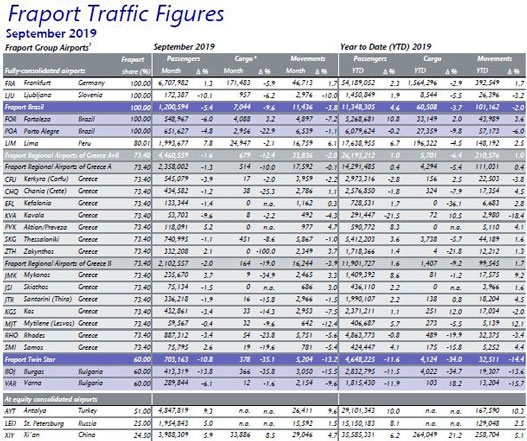 During the first nine months of the year, the airports in Fraport's international portfolio registered mixed results. In September 2019, passenger traffic decelerated at most of Fraport's Group airports worldwide. This can be attributed to the weaker global economy, as well as the bankruptcy of several airlines and tour operators – with other providers unable to fully absorb the additional capacity immediately.