May 30, 2018: The International Air Transport Association (IATA) released data for global air freight markets showing that demand, measured in freight tonne kilometers (FTKs), rose 4.1 percent in April 2018, compared to the same period the year before. This was up from the 1.8 percent growth in annual demand recorded in March 2018.

After a sharp fall in March 2018, to a 23-month low, global air freight volumes recovered slightly in April 2018. The pace at which demand is growing, however, remains significantly slower than in much of 2017.

The weaker growth in air cargo is primarily due to the end of the restocking cycle, during which businesses rapidly increase their inventory to meet unexpectedly high demand. This is consistent with demand drivers moving away from the highly supportive levels seen last year. The Purchasing Managers’ Index (PMI) for manufacturing and export orders fell in April 2018 to its lowest level since 2016. A softening of global trade is also evident with containerised freight demand slowing in tandem with air freight demand. Seasonally-adjusted freight volumes continue to track sideways.

"April saw a strengthening from the abrupt slowdown in growth experienced in March. This is good news. We remain cautiously optimistic that demand will grow in the region of 4 percent this year. But the forecast appears to have increasing downside potential. Oil prices continue to rise as does protectionist rhetoric. Borders open to people and to trade drive economic growth and social prosperity. We are all disadvantaged when they are closed," said Alexandre de Juniac, IATA's director general and CEO. 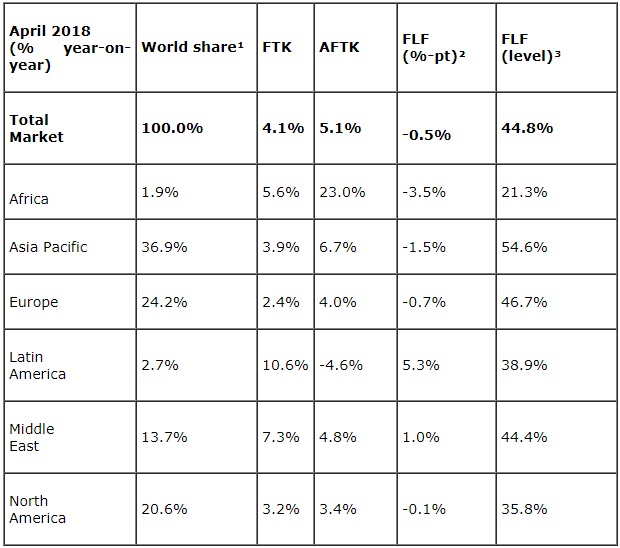 Regional Performance
All regions reported growth on 2017 levels, albeit at different levels of expansion.

North American airlines’ freight volumes expanded 3.2 percent in April 2018 compared to the same period a year earlier. This was a slight deceleration in demand from the previous month. Capacity increased by 3.4 percent. The weakening of the US dollar over the past year has helped boost demand for air exports. Data from the US Census Bureau shows an 11.7 percent year-on-year increase in air export volumes from the US in Q1 2018, compared to a slower rise in imports of 7.5 percent. More recently however, the US dollar has been rising.

European airlines posted a 2.4 percent increase in freight volumes in April 2018. This was over double the rate of growth of the previous month. Capacity increased 4.0 percent. Seasonally-adjusted volumes are broadly trending sideways. The strength of the Euro and a softening of export orders in Germany pose downside risks to European carriers.

Middle Eastern carriers posted the second fastest year-on-year growth in freight volumes in April 2018, up 7.3 percent. This was a significant acceleration in demand over the 0.8 percent recorded the previous month. The increase mainly reflects developments from a year ago rather than a substantive change in the near-term trend. Seasonally-adjusted freight volumes continue to track broadly sideways. This is consistent with signs of a broader moderation in global trade. Capacity increased 4.8 percent.

Latin American airlines experienced growth in demand of 10.6 percent in April 2018 - the largest increase of any region for the second consecutive month. Capacity decreased by 4.6 percent. The pick-up in demand over the last 18 months comes alongside signs of economic recovery in the region’s largest economy, Brazil. Seasonally-adjusted international freight volumes are now back to the levels seen at the end of 2014.

African carriers saw freight demand grow 5.6 percent in April 2018 compared to the same month last year, after a decline of 3.4 percent in March. Capacity increased by 23 percent. After a surge in international FTK volumes last year, seasonally-adjusted international freight volumes have trended downwards from a peak in late-2017 and are now at levels seen mid-2017.