September 6, 2017: Global air freight markets showed that demand, measured in freight tonne kilometers (FTKs), increased by 11.4 percent in July 2017 compared to the same period a year ago, according to the International Air Transport Association (IATA). This was the fourth time in five months that double-digit annual growth was recorded. July’s year-on-year increase in demand is nearly four times higher than the ten year average growth rate of 3.1 percent.

“The robust growth in air cargo demand is consistent with an uptick in global trade, rising export orders and upbeat business confidence indicators. There are, however, signs that demand growth for air freight may be nearing a peak,” said the industry body through a statement.

Seasonally-adjusted air freight volumes were flat in June and fell in July; and the global inventory-to-sales ratio has stabilised. Air cargo often sees a boost in demand at the beginning of an economic upturn as companies look to restock inventories quickly. This tapers as inventories are adjusted to new demand levels.

"July was a strong month for air cargo with double-digit growth. And for the third consecutive month demand for air freight grew at a faster pace than demand for air travel. While the outlook for the rest of the year remains positive, there are signs that the cyclical growth period may be nearing a peak," said Alexandre de Juniac, IATA’s director general and CEO. 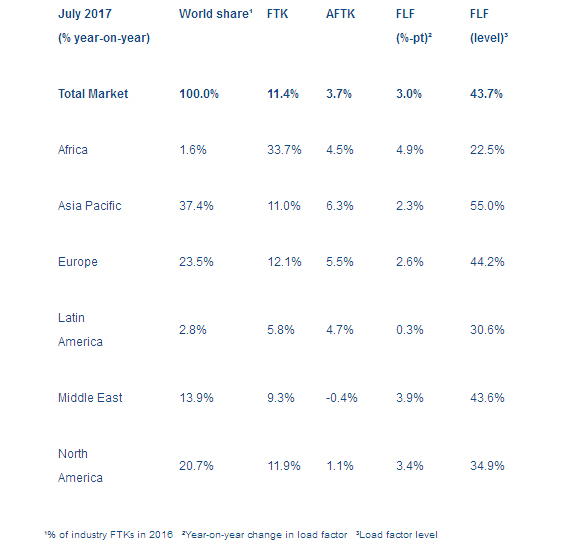