The 2022 air cargo freightscape has been wrought and ravaged by all kinds of operational challenges that have led to skyrocketing rates and capacity compressions. This month's regional report turns the lens onto the Americas and where it stands in the global air cargo industry.

"Across the world, general air cargo market volumes fell -8% year-over-year in May, comparable to April, as the aviation industry's stuttering recovery was compounded again by macroeconomic events which show no sign of abating."

Cargo volumes the world over were on the decline, trickling down into freight rates which mirrored the downward trend.

In last month's edition, we zoomed in on the state of air cargo in the Asia Pacific region. This month, we decided to spotlight another region badly hit by worldwide macroeconomic events causing operational hurdles – the Americas.

Let's first break it down. 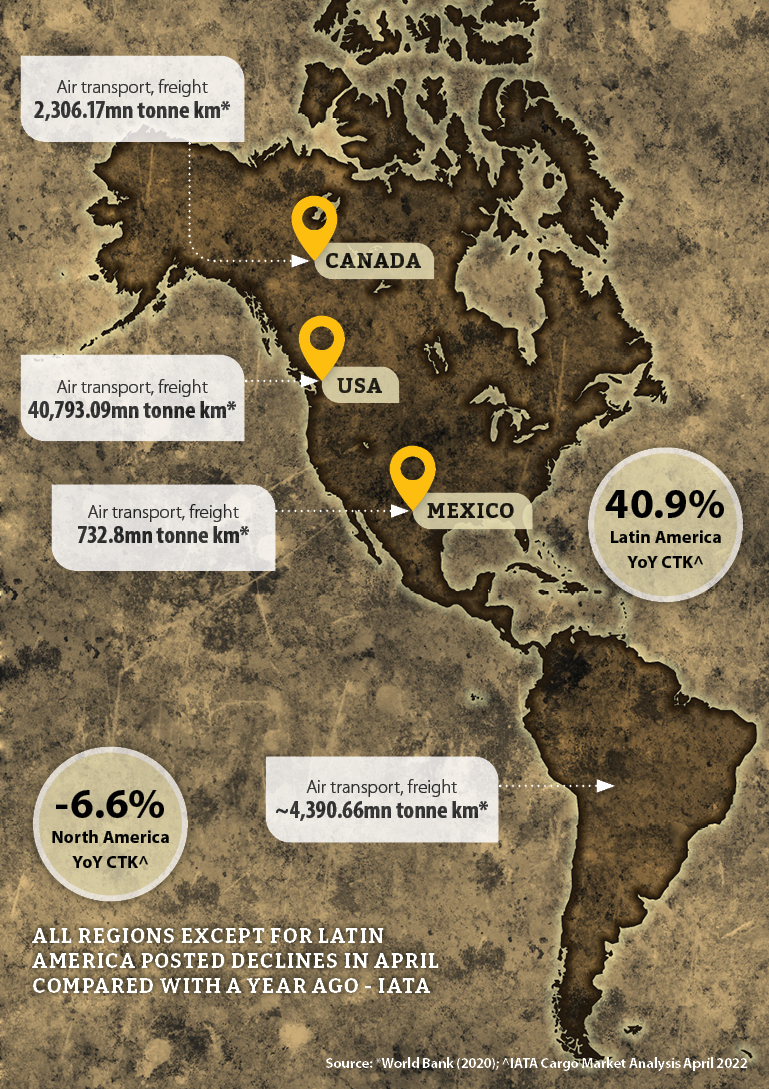 Boasting a robust cargo ecosystem, air cargo across the Americas has been a bustling activity.

In August 2021, with the air cargo industry still reeling in the aftermath of a ravaging pandemic, the leading market research company – Research and Markets – published its forecast for North America entitled, "North America Air Cargo Market to 2028 – Covid 19 Impact and Analysis and Forecast by: Type, Services, and End-User."

The report states that the North American air cargo market will touch $51.29 billion by 2028. This translates to the market climbing up around $20 billion from 2021, where it stood at $31.20 billion.

The report further breaks down the North American cargo market into segments of type, services, end-user and country. The type classification is further categorised into air mail and air freight.

In its April 2022 Cargo Market Analysis, IATA cited the Russia-Ukraine war and the pandemic as the reasons for the drop in global goods trade that has "continued to decline in 2022, with China being the main drag."

However, the dark horse that emerged as a stand-out performer in the IATA worldwide airfreight statistics was the Latin America region. According to IATA, "Overall, international CTKs fell by 10.6% YoY in April. CTKs were down in April compared with a year ago in all regions except for Latin America, where a strong recovery in air cargo volumes continues (Chart 7)."

In fact, unlike the global trend which witnessed a severe fall in capacity, the Latin America region reported an expansion of 2.5% month-on-month in seasonally adjusted monthly volumes.

So what is this formula for success that the Latin American cargo players have adopted?

According to IATA, operators have incessantly been expanding their fleet, showing relentless "optimism".

In IATA's own words, "Airlines in this region have shown optimism about air cargo by introducing new services and capacity, and indeed in some cases investing in additional aircraft for air cargo in the coming months."

And this is true, take a look at Avianca Cargo's statement on its website, In May, while welcoming four additional Airbus A330-300 P2F to its fleet, Avianca Cargo CEO Gabriel Oliva, said, "We are very pleased to announce the arrival of these aircraft to our cargo fleet, with which we will offer not only greater capacity, but also an increasingly robust and flexible route network focused on the needs of our customers, facilitating trade between Latin America and the entire world. We reaffirm our commitment to continue driving the economies of the region..."